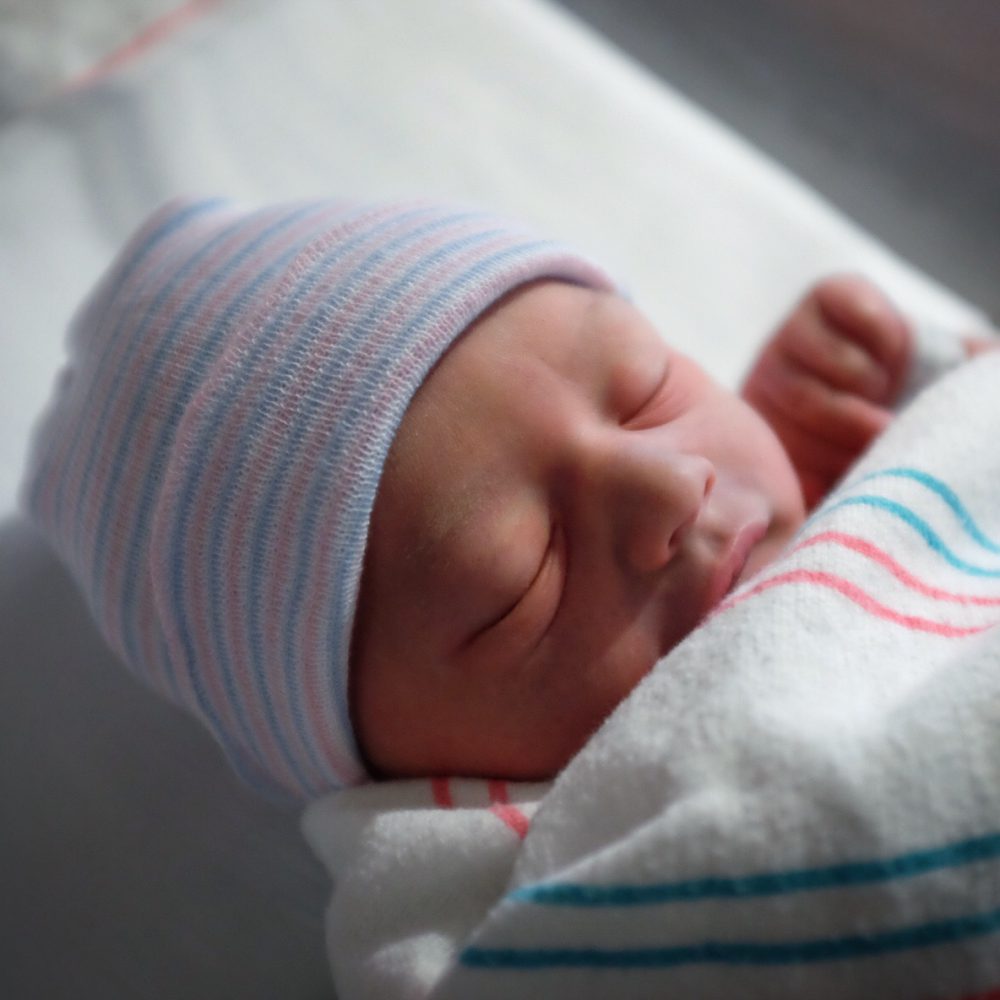 I have been meaning to sit down and write Beckett’s birth story since he was born. But you know #momlife and all. So fast forward 12 months later and here it is LOL. I’m writing this merely so I can remember his story, but y’all have asked as well, so I am so happy to share it with yall.

This day started at like any other day. It’s a Saturday, so it’s our run errands and spend time with the family day. We were all slow getting up. But of course Declan was up and going around 7AM like he always is. Any other moms have an early riser?

The first part of the day was super chill. After Declan’s nap we decide to go to Costco. It’s then that my contractions started. Since this was my second one, I  knew what they felt like. But for whatever reason I didn’t want to believe that it was happening, NOW, at Costco. So I brushed them off as just Braxton Hicks. But I told Chris just to be on the safe side.

We kept walking around Costco and I was totally fine. They would come every now and then, but nothing major.

We got back home, I fixed dinner. And that’s when they started to hurt worst. Bad enough to where I had to stop what I was doing and breathe through. Declan was too cute and kept asking “Mommy what’s wrong?” 😂

When they kept coming closer together, I told Chris that it was probably time to call his mom so she could come over and stay with Declan.

I gave Declan a bath (What can I say, I still wanted him to have his routine 🙈) I talked to him and snuggled for a little bit. I wanted to soak up that time with him before he wasn’t the only child anymore. That’s when Chris captured this moment.

Chris’ mom came over with in 20 mins. And it’s a good thing because my contractions where getting closer and closer—and hurting a lot worse.

We got in the car and made the trek to the medical center, about 45 minutes! I LOVE my doctor, what can I say!

I just kept hearing that with your second one, everything happens so much faster and boy was everyone right.

We got to the hospital around 8:30 pm got check in. And when they examined me I was already 7 CM DIALATED! SAY WHAT?! That was crazy to me! I remember to the nurse saying “Man, you’re a strong woman to get here and already to 7cm.” That made it a little better 😉

It was at that point that she asked if I wanted an epidural and I didn’t even think about it. I said no. I didn’t have an epidural with Declan. And I didn’t want one with Beckett. I figured, if I could do 12 hours of labor with Declan sans drug, I could do this one without any too. I already knew this time was going to go faster.

For the next hour or so, I remember just breathing through the contractions with Chris along side me. We played some music. We tried watching a show, but the constant interruptions didn’t make that possible.

When she came to check me again, I was 8.5 cm dialated. She said this baby is ready to come soon. I still couldn’t believe it was happening so much faster.

At this point she said that we were going to try the peanut in between my legs. I’d heard of this before, but thought it was kind of silly.

I put the peanut in between my legs and from what I can remember, I think 30 mintues later everything sped up.

That’s when everyone started to come into the room and prep for his arrival.

Beckett Allen arrived and our lives were never the same.

Getting that golden hour with him in the beginning was one major goal for me. After he was born, he was very purple which they said happens when you have a quick delivery. So they put him under the warmer and monitored him. Needlessly to say, my heart sunk. All I wanted to do was hold my little man. But I couldn’t.

All I remember is not taking my eyes off of what the nurses were doing over there. Chris stayed with Beckett the entire time but kept looking over at me to reassure me everything was OK. About 45 loooonnng minutes later, I could finally hold him 🙌🏻 And the tears rolled down my cheeks. I just kept saying, I’m so glad you’re OK. We love you so much.

They said his oxygen levels were extremely low which is what caused him to turn purple. They would just be monitoring him extra close the next few days. And that meant we were most likely going to be staying an extra day.

That day changed our lives in the most unbelievable way. Declan had some adjusting at first. He was not so sure about him. When we would ask if he wanted to hug baby brother he said no. But after about 2 weeks, when he realized he was he to stay, he hasn’t stopped loving on him.

I exclusively breastfed for about 4 months. I had a very hard time with this little man. Things were very off with me and I was finally diagnosed with Post Partum Depression. You can read more about How PostPartum Depression Saved Me and why I want the conversation around mental health and depression to continue.

At around 4 months postpartum, I stopped breastfeeding and we switched to formula. I will say that my baby is happy, healthy and reaching all of his milestones. So no mom shaming. You do you boo. We do what works for us. FED IS BEST 😊

As far as recovery time goes, it was definitely a lot easier this time around because I knew what to expect. I knew I would be in those lovely mesh diapers for a week or so. I knew as often as I was changing Beckett’s diaper, I would be changing mine. I knew I wasn’t going to be getting a lot of sleep, so I knew to sleep when he slept (that’s one of my biggest recommendations ladies). And I knew to ask for help.

We are loving our little life and family of four right now. We have come to accept we have early risers. So the days of sleeping in are long gone, but we are great with our new normal 😊

I know this post is long, so thank yall so much for reading it till the end. If you have any more questions about being a mom to now two under 3, please let me know!

Sabrina Skiles founded Homegrown Houston as a lifestyle resource for millennial women. She shares daily inspirations from fashion and home décor to family and motherhood to health and wellness. In addition to lifestyle, she is also passionate about bringing more awareness to psoriasis and psoriatic disease. Sabrina has been living with psoriasis for 15+ years. Throughout this time she has tried everything from biologics, topicals, tar shampoo and light therapy. She also lived in Maui, Seattle and now currently Houston—so she understands current challenges psoriasis patients face on a day-to-day basis and how environment can play a role in managing psoriasis and maintaining a healthy lifestyle. Sabrina is also a volunteer mentor and coach for the National Psoriasis Foundation providing guidance to those newly diagnosed. Sabrina’s mission is to empower millennial moms to find their self-confidence while getting rid of the mom guilt; and empower those living with psoriatic disease that it’s possible to live a healthy, happy and fashionable life. Currently, you can see Sabrina sharing her psoriasis patient expert insights at Healthcentral. She has also written for Everyday Health, Healthline, Makeup.com and Webmd. Sabrina has been featured with SELF Magazine, SheKnows and on the cover of Health Monitor Magazine’s Guide to Living with Psoriasis. Sabrina and her husband Chris have been married for eight years. They have two young boys, Declan(2.5) and Beckett(7 months). They love to travel, try new food and binge watch new Netflix series. You will always see Sabrina with coffee(or wine) in her hand. 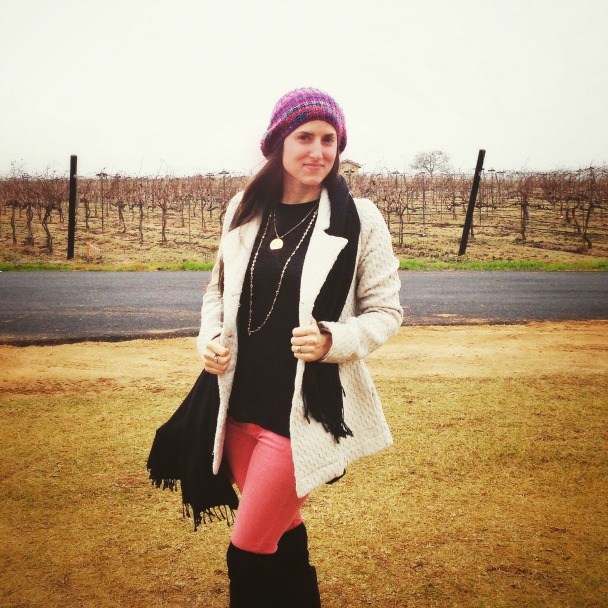 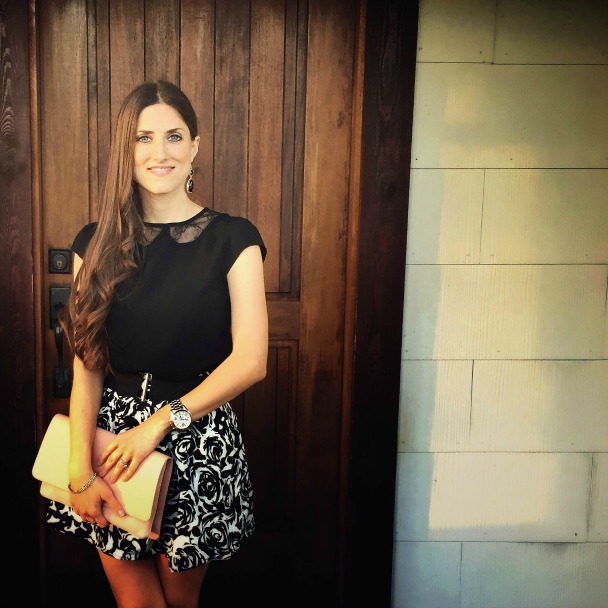 Fit and Flare Skirt in Black and White 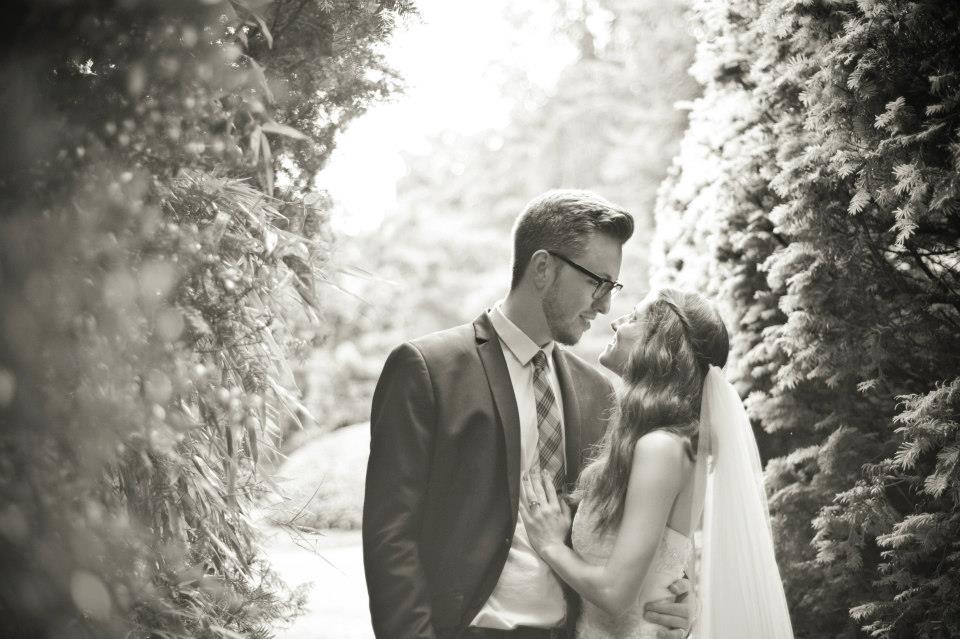